Chapter 2 Update: Some bad news, and some good news

So, first the bad news: I'm pushing back the release date. Back in May, almost exactly four months ago, I said that my "extremely rough" estimate was eight months. This was based a few simple estimates. I knew the first chapter had taken roughly 7 months, and I knew this one would be both faster and slower. Faster because I was reusing a number of basic assets, art, programming etc as well as knowledge I wouldn't have to re-learn. And slower because I anticipated it being about twice the size of chapter one. So I split the difference, added a month to be safe, and said eight months.

I've avoided doing a more in-depth breakdown and estimate of all the moving pieces until recently, partly because they weren't all nailed down yet and partially because I dreaded even thinking about it until I was over the first hurdle: doing the new batch of art assets (not counting the scenes). As of now, I'm over that hurdle: While there are still variations and minor things to add (still have a new outfit to design for Mezz), the new assets are finally in the bag. This represents roughly (roughly!) a third of the time and effort needed to get the game finished. Notice though, that we're at the half-way point and only a third done.

So, I've finally done the careful breakdown of everything that's left, and it more or less bares that out: After itemizing everything I've got left to do, it looks like it will take me about 9 months to finish what remains. This is five months over the original estimate.

I understand if this is disappointing for people: it's disappointing and frustrating for me as well. For a number of reasons I was really hoping to get this out sooner; now it looks like I'm in for a longer haul. I know a lot of people are looking forward to the release, and I'm genuinely sorry I can't get this out faster. But I'll keep plodding away, slow but sure. We'll get there.

Why is it taking so long? Like I said, the chapter is somewhere between two and three times the size of the first chapter, depending on what you're looking at. I should have put more weight on that rather than the time-savings of what I already had to work with.

But that's a good transition to the good news. I promised an update "halfway" through, and since we're at the old halfway point, I'll share a bit of what I've been working on. I hate to spoil or drip feed, but it's been a while, and especially after this setback I owe you guys at least a little. So here's a look.

As previously hinted at, the hypno mechanic will be a bit different for chapter two. Without spoiling too much, certain things in battle will provoke an "invitation" from Mezz, which will look like this:

And then, given the right circumstances, that will lead into this: 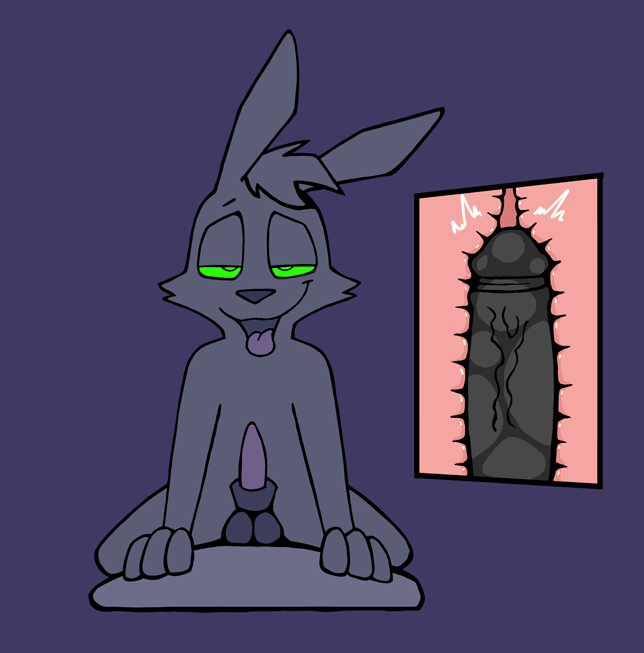 There are three basic acts like this in chapter two battles vs the two in chapter one, each with its own invitation and minor variations. 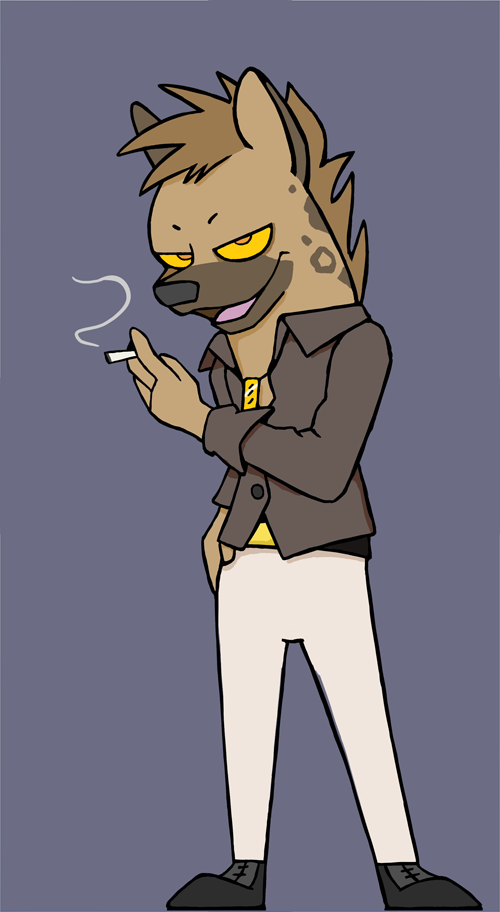 And this is Mahir, one of the two bosses/antagonists of chapter two. Hyenas will be a big part it, though certainly not the only new species. For chapter one I only had to create one new character design, Diezel. For two, I've created FIVE. Yeah.

Again, sorry for the downer. I will get this thing out though, sooner or later.

Will there be any chastity in Chapter 2 or later chapters?

Probably not, but we'll see.

Late to the party, but is this the summary update to finish the game entirely or will you tack on a couple more chapters? Regardless, I love all the concepts and the game at hand. <3

Currently working on Chapter 2, as described above. Plan is to have it out toward the beginning of summer. Glad you're enjoying the game so far!

cant wait for chapter 2- any more updates you could fill us in on regarding chap 2? :3

Update (news) planned for the end of next month.

I would like Mezz to have a fighting partner and also fall down and end up like Mezz hehe... but that would be more problematic when developing the game program,...

Doing a two-person party would add a lot of complexity to the mechanics, yes. Partner might not be out of the question though.

exactly, my friend. Although it would be more fun, it would represent more work for you when programming the game. Also, you should make changes to the original idea and the script of the game. It's just a suggestion, and hopefully you'll manage to include a partner. but still continue with your original idea. that, if it's as good as the first chapter, it's going to be a success, again...

I really loved the game so much <3 I'm looking forward to the second part like everyone, actually it's a surprise I thought it was already finished, so I wish you the best of luck

By the way, a little unhelpful advice, but it is said that hyenas are mainly a matriarch pack, therefore the males are not very active and do not really do anything, I don't know if they told you,I hope the advice is of some use, I love your work!!

Thanks! Glad you're enjoying it. I look forward to having more to share on the second part.

Everything looks amazing! Just played the first chapter, such a great experience.

looks amazing so far. looking forward to when you finish the next chapter no matter how long it takes.

Thank you for releasing a sneak peak, it looks incredible already and I’m even more hyped now!  Take your time and do your best, it wouldn’t be as good if you rushed yourself. I will definitely be donating when I have the expendable income.

Thanks! Will definitely do what I can to give it the time it deserves.

As the man said, ya can't rush art. Obviously everyone's hyped for an upcoming release, but it's definitely gonna be better to have a finished and perfected chapter instead of something "christmas rushed", aha. Keep up the good work, and ignore the whingy haters

Thanks! And honestly, I've been pretty lucky with "the haters" so far: I think so far there's only been two, maybe three people that were really off the rails and had to be banned. Everyone else has been great!

The game is incredible, I can't wait for the second chapter to come out, and I could put in the second chapter a maid-like outfit that the character finds and could only use when he has his mind changed just like in the first chapter in which he doesn't manages to hit, and becomes a toy.

Probably won't be any maid outfits, but plenty of other fun stuff.

All good news, can't wait to see the second chapter come out! Looks absolutely amazing just from what you showed here.

I think its all good news and the game development can take as long as it needs as long as you are happy with the final product and i know it will be as amazing as the first one even better judging from the previews :)

Thanks. Will definitely do what I can to make it a fun one.

The good things make you wait. Take your time, friend. Personally, I understand how burdensome a project of this kind is (I'm making a comic and it's giving me work, imagine this, which is game programming). I'm glad you continued with your project and... well to wait (impatiently) for this new and hot adventure of our bunny hero Mezz...

Thanks! And good luck with the comic!

While I'm disappointed by the extended wait, It's totally understandable. I'd rather have a more accuarate estimate for the game as it's meant to be rather than a rushed effort to meet a quick estimate deadline.

And it's always a bit of a balance. As great as people have been, I do still want to get this out in a somewhat timely manner. But I agree, it has to be of at least a certain quality, or it's not worth putting out.

so in other words you misjudged the amount of work needed?

This is only one person working on it so if it was a misjudgement take it with a grain of salt. for the amount of work hes putting into this as one person hes doing an outstanding job for how fast he is getting this done.

Wouldn't really help in this case. Paradoxically bringing in more people would almost certainly slow things down for various reasons. But work continues.

so you saying it wouldnt work?

I'm not looking to work with anyone else at the moment, no.

I'm so glad that you're taking your time to get it right. These games I always come for the images, but stay for the stories, especially when the art looks awesome! Not only that, but you are doing this SOLO! Keep on keeping on, mate, I will wait patiently for the next awesome looking chapter.

Getting accurate estimates on the production time is always a tricky task, especially for really small teams. However, given what you have in store for the game, I'd say that's absolutely understandable and you shouldn't feel bad about taking the time you need :)

I appreciate your openness about it as well as the time you put into your work and can't (but will patiently) wait for future updates, because I recognize that this game has a lot of potential :D

Yeah, there's a lot of learning on a lot of different things, time estimates included. But hopefully that will improve along with everything else. And thanks!

Can't wait my friend. All this means is more effort in the game itself so ill gladly wait for a finished or at the very least a mostly finished product. Good luck my friend

This is an amazing game and I am definitely looking forward to this chapter two!

Mahir has a LOOK about him. I think i'm getting a feel of his personality

He's gonna be a fun one, yeah.

I think we all learned how important delays are after what happened to Cyberpunk. Thank you for the update! :)

Ha! I take comfort in knowing no matter how bad I fuck up, Mezz will never manage to clip out of the world and fall forever.